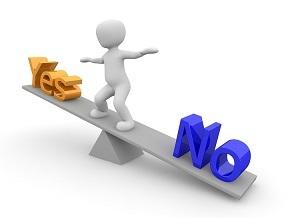 How many times have prospects told you, “I need more time to make a decision?” Too many?

In those situations, it’s easy to blame the prospect for being indecisive, uncommitted, and a procrastinator. But does the prospect deserve all of the blame? Shouldn’t some of it fall on the salesperson’s shoulders? Perhaps the major share?

Exploring both the duration of the need and the consequences of fulfilling or not fulfilling the need should give you a fairly good idea of whether you’re dealing with a “motivated buyer.” That’s someone who is likely to make a decision in a reasonable amount of time, as opposed to a “tire kicker” who is likely to need more time to make a decision, or never make one at all. Another aspect of the selling opportunity that will influence the timing of a decision is the complexity of the prospect’s decision-making process.

The more people there are involved in the buying decision and the greater the number of different corporate levels participating in the decision, the lengthier the process is likely to be, and the more likely that decision target dates will be missed.

The need to do a thorough job of identifying the prospect’s decision-making process (including the “who,” “what,” “when,” “where,” "why," and “how” elements) should be obvious here.

The more you understand the process, the less likely you’ll be surprised by it…or disappointed by it.

Yet another element that often contributes to “I need more time” requests is the salesperson’s failure to secure firm commitments from prospects – well in advance of scheduled presentations – to make decisions at the conclusion of those presentations. All too often, salespeople consider it a given: they will make a presentation, and the prospect will make a decision. But without the prospect’s firm commitment for a decision at the end of the discussion, you’re likely to find yourself at the beginning of a long, unsatisfying story entitled, “Let's Think It Over.”

Questions? Contact Ken Smith at 301-590-8700, or Contact Us Online. You can go here to learn about our upcoming live webinars that introduce proven strategies for selling in today's business climate.

Video: Sandler Rule #46: There Is No Such Thing as a Good Try

Sales Training and Golf: A Lesson in Repetition